A Hundred Suns  will be performing the The Underground Revolution show @ The Booth Hall, 17th of March.  Show begins at 8pm.  £2 entry at the door.  Students with NUS Cards Free Entry

Hereford City Centric and The Booth Hall have come together to create a new series of local Hereford band interviews aptly named ‘Sounds From The Sofa’.  Our “glamorous” set-up involves a comfy sofa sitting on top of the Booth Hall stage (can you feel the musical vibrations?), where our participants park their derriers and answer a series of serious, and not so serious questions about themselves.

This interview commenced before entering the doors of The Booth Hall when I ran into Claire Perkins, her boyfriend Drew and  Ruby, their Staffordshire pup sidekick just outside The Booth Hall.

“It is true, all the bands are helping to promote each others gigs with the rise of music groups on Facebook.  It feels like what Seattle would have been like back in the 80’s” – Claire Perkins

Her positive vibrations encompassed me from across the street,  I knew magnificent chaos lay ahead.  In her sassy , grungy little number that included a pretty funky pair of Docs imprinted with glow in the dark skeletons, a vintage-style brown fuzzy peacoat,  and two charming little buns on top her long dreads…it was Babes in Toyland all over again.

It is like she was born to be a front woman, which is why she is the Vishudda (throat chakra) of the energetic four-piece unit that is A Hundred Suns.

….enter typically tall bass player, Cheshire born James Whitehurst, wearing a concerned smile due to running a few minutes late – Hereford traffic of course.  No worries, soon he was chillin’ on the sofa all warm and bundled up in his woolly jumper and riding Claire’s vibrations as they teased photographer John Rose with their synchronized antics.  All the members in this band have a strong connection and it is quite evident when they play.

The other two members who couldn’t take time off of work are, guitarist Richard Gardner, a Welsh Billy Corgan flashback who has talent and experience under his belt, and Stephen Bennett, long-haired drummer and Cornishman of the band.  Long hair rules!

HCC:  Hey Guys, glad you could join us for this interview.  What has your day looked like so far?

James/Claire:  Work…we both have full-time jobs outside of the band.

HCC:  Oh haha ok I see.  Do you have other side projects on top of work and A Hundred Suns?

James:  I volunteer for West Mercia Search and Rescue.

HCC:  That must be a difficult thing to do, rescuing people from rivers.  Noble.

James:  It can take its toll…I have seen many sad things but I can’t get into them.

Claire:  I sing and play acoustic guitar as a solo artist under the name ‘Perk’, write music reviews and run a travel blog called Cyberperkblog.

HCC:  Wow a lot to take on board on top of your NHS job at Hereford Hospital.  What drive guys!   So what is the message behind your music?

Claire:  I suppose I should answer this since Richard and I write the songs, the lyrics in the song I wrote ‘RED’ are about the disillusionment I feel for how the classes treat each other and what a let down society and our governments are today. The gap is growing everyday.

HCC:  Yes I suppose it is up to today’s youth (get on it kids), and artists like yourselves who have a platform to express discontent and take their world back.   The world is not enough aye.  Most memorable gig?

Claire:  (James/Claire make eye contact and spill the beans)  We were playing in a pub called The Dolls House in Abertillery, when this man named Dave who was pretty drunk, fell over a guitar case on the floor next to the stage.  He was just on the floor the entire set trying to get up.  I just said “It’s ok matey, you look comfortable”  It was great!

HCC:  (Belly laughs!!!) Dave sounds like such a legend.  Do you guys have a favourite watering hole in Hereford?

James:  I really like The Railway Inn at Dinmore and the Oxford Arms in Kington…I don’t live in the city (James lives a nice quiet life alongside his chickens)  although I am in a band and play a lot of the venues.

Claire:  Well we all certainly love The Booth Hall entertainment wise but I would say the The Shack Revolution for the pizza and cocktails.  The one I frequent most these days is Hereford Beer House.  The place is amazing.

HCC:  A pirate watering hole aye.  I’m with you on those three choices Claire, since I haven’t been to the other pubs being a city slicker.  Been there done the village life.  Speaking of which, how do you guys feel about what is happening in Hereford these days?

James:  It has become a city of young entrepreneurs who are opening fantastic, innovative food establishments around the city.  Places like The Shack Revolution, A Rule of Tum and The Beefy Boys have upgraded the credibility of Hereford’s food culture.

Also, the music scene is suddenly thriving.  Since the Booth Hall has re-opened, Willow and Arran Vidal-Hall have created a buzz by being open-minded to music promoters who put on live music and entertainment.  We also love The Victory who have been putting on bands for years, and also De Koffie Pot is another venue, something that as a band we appreciate….they aren’t in it for the money either like certain unnamed venues around the city, so you get some really great shows. The Bands are all supportive of each other too, and we have to mention a band we really really love called Skinhorse.  They are pretty unique and our band are huge fans.

Claire:   Yeah Skinhorse!  It is true, all the bands are helping to promote each others gigs with the rise of music groups on Facebook.  It feels like what Seattle would have been like back in the 80’s.

HCC:  Loving it!!!  Beautifully said.  Well bare in mind The Underground Revolution Hereford is putting on some great bands including yourselves and Skinhorse.  We are always looking for unique bands with a certain edge.  It is really more about bands that aren’t too overplayed locally, and opening doors for bands on a grass roots level.  We will do bigger shows and festivals sometimes, but everyone deserves a chance.

No one escapes this sofa without pulling questions out of the musical hat! 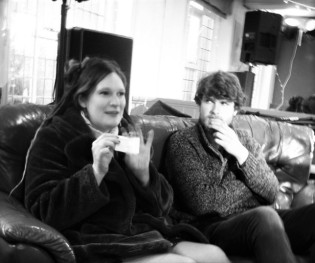 Claire:  I don’t really watch television, so I am going to say “my guitar”

James:  I have never tried Haggis so I am going to have to go with black pudding.

I expected to have a fabulous time with these guys from A Hundred Suns, but had no clue just how much John Rose who was doing the band shots would have…it was all too endearing.  We were all kids again, even though I felt a bit like the teacher that day.