Last night, I spent my evening sitting in a hall somewhere in Rhayader, Mid Wales quietly fan-loving  Tom Hingley as he belted out some pretty powerful vocals.  In fact, I think he saved the best of his vocals for his latest solo songs. There were plenty of Inspiral Carpets songs in his performance, we needed our fix, although it was nice to hear that his solo music could stand on its own.  His songs were deep, about reflection as we get older and look back at our accomplishments and failures.One song that stood out to me, expressed the sorrow many parents encounter after realising they failed to devote themselves selflessly to the first born child, yet did so with the second born. It happens in the case of many parents having other children later in life. In his case, I can only imagine the indulgences of being a part of the Hacienda set, and fronting bands like Inspiral Carpets and The Lovers (with members of The Fall), would have something to do with that.

His acoustic playing skills were beautiful, giving me shivers and all, a true seasoned guitarist. Another song that I enjoyed for the message it was putting out was about his fans, and well just what fans mean to bands in general. Not an egotistical “you adore me” version, more of an ode to the fact that without fans, bands would go nowhere.  Bands connect with fans by writing songs that relate to us all on an individual level, and become the theme songs of our lives, we keep them going by buying their albums, merchandise and going to their shows.

It is easy to lose touch with this concept as a band, after working so hard to find a record deal playing for free, or pennies, and then suddenly finding yourself with a PR team between you and the fans who got you there in the first place. Tom Hingley, appreciates his fan base at least, especially as he is working hard playing music around the country promoting latest songs and albums like Sand, and also promoting his autobiography ‘Carpet Burns’ published in 2011.  It will surely make an interesting read.

In fact, there was a table of merchandise, and I overheard someone saying he was selling original Inspiral Carpets posters!!! Don’t quote me, but if this is so, it is one for the collectors. He has also recently formed a band called The Tom Hingley Band, which he is completely rocking out in, and get this, he even has his own stout called ‘Tom Hingley’s Stout’ (of course). The price is kind of shocking, but I am sure there is a reason, he did mumble something about it, except I was too busy trying to hear over the 4 very naughty Welsh lads chirping away in front of me through the entire show. 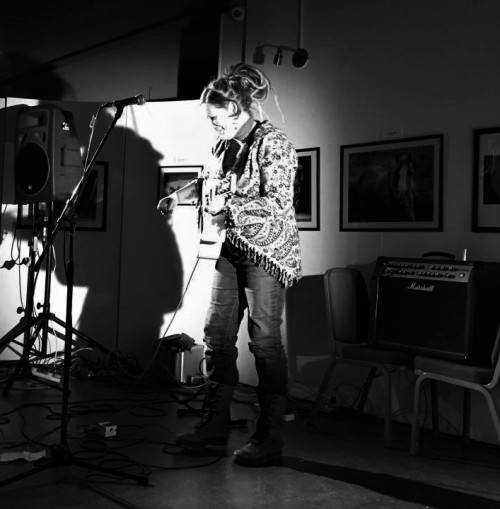 Tom Hingley’s supporting act Perk, who I rode in with to support and of course review, is a great friend of mine, but I can tell you as a blogger, this is an honest observation and not biased.  Have to keep up my street cred ya know.

We accidentally took the long way to Rhayader from Hereford, but hey, we got there in the end, just in time for sound check. This beautiful pairing was made possible by Chris Rogers who runs the Mid Wales Rhythm & Blues Club and HabitFormed Records when he discovered her playing at Hereford Rocks.  Lucky girl.

Sometimes you have no clue what to expect from a venue in Mid Wales, and we certainly had no expectations, just our imaginations running wild. The town of Rhayader is basically made up of four streets, North, South, East, West and then the lanes leading off to housing estates and isolated sheep farms.

We discovered upon arrival that it was in a community hall. A bit surprising, whatever works! Actually it was filled with life once you entered. Local artists had their paintings, pottery and books on display, just a bit quiet for what us city slickers are used to. Not the kind of place you are going to mosh in put it that way.

I did mention before, some local guys were on their worst behaviour, grown men on what appeared to be an “obnoxious lads night out”.  Save it for the rugby match boys.  This just wasn’t one of those gigs, we wanted to hear the music and lyrics from these two extremely talented song writers.  Never mind, the more civilised onlookers had a music connoisseur aura about them as Perk sang her abstract lyrics and strummed along to some beautiful songs that have strong influences by some of her favourite songbirds such as, PJ Harvey and Joanna Newsom.

She doesn’t shy away from taboo subjects that is for sure. Her performance included some of her latest songs ‘Carrion Crow ‘and ‘Ice in the End’ and closed with ‘Avenue’, which showcased a powerful side to her vocals. The audience didn’t know who she was, yet walked away impressed and enlightened by this Herefordian magpie with long scarlet dreadlocks, who also happens to be the front woman to heavy rock garage rock band A Hundred Suns.

This performance took place in the Carad Museum and gallery https://www.facebook.com/CARADuk/