Each year the art college gives up to four artists the opportunity to use the college facilities to develop their art practice and produce work for an exhibition at the end of their tenure. Lucy Baxendale, Andrea Mclean and Katy Alston have clearly been very busy. The exhibition that marks the culmination of all their work was held last Tuesday and there was a lot of outstanding work on show. Each artist displayed a distinctive style and viewpoint but there were recurring themes of exploring a world beyond our own. 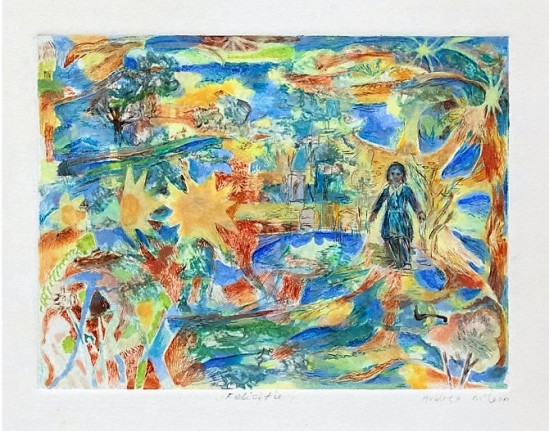 Andrea Mclean grew up in the inspiring natural surroundings of the Forest of Dean and studied at the Slade. She is interested in spirituality and particularly inspired by the writing of Thomas Traherne, a 17th Century mystic who wrote about experiencing the world as a whole, and was by all accounts Hereford’s equivalent to William Blake. Andrea had previously worked on a project about Blake and was pleased at the chance to continue her explorations for two terms attempting to map the world within through her hand coloured etchings. As well as the visionary, she is interested in medieval maps and figuratively weaves these elements into abstract terrains that evoke an etheric sense of gentle rapture. This quality of gentleness and positivity seems to be characteristic, and the images really inspire. Andrea McLean is going on to work on a project at the Royal Academy and will be designing artwork including a mural for an outpatient department in Hammersmith. 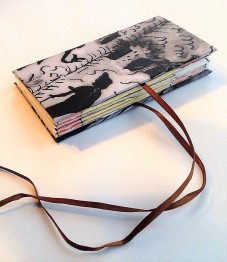 Katy Alston is also interested in maps, and has previously been known primarily for mapmaking but has got into book arts, hand binding small unique books in a variety of ways.  Her work, entitled The Enchanted Forest draws on the Grimm fairy tales and features stamps that allow you to write letters back in time.  She was grateful to the illustration students for letting her crash their studios and use their facilities so felt she should give something back, and ran a carousel book workshop where the students made their own books.  There was on show an array of different binding methods that showcased her illustrations and particularly interesting were her ‘nets’ flat renderings of 3D objects in print that could be cut out and put together including an impressive model of the building on College Road.

Last but by no means least is Lucy Baxendale whose work is a window into a parallel world that she is uniquely privy to. A land where sea monsters have trees growing from their mouths, ruled by an almost feline king and born of a god called Silex who wandered alone in his world watering the ground with tears of loneliness as mountains dropped from his spine. There is a sense of discovery and wonder that I hope will keep Lucy exploring imaginary worlds for many years to come.

I have known Lucy for a few years now and have been following her career with interest. Knowing an artist is a disadvantage to writing about them because they don’t take you seriously in interviews and you feel like you can’t be impartial, but I genuinely feel I would love her work as much as I do even if I wasn’t fortunate enough to be friends with her. Her work is representative of her unique vision and dedication to art and I have never seen anything else quite like it. The scope of it is immense, it genuinely feels like a whole world.

The drawings, which she humourously calls ‘mind vomit’, are almost hallucinatory, with bizarre faces emerging from swirling inky forms. The one time I came across something equivalent was in Raw Vision magazine and was drawn by a clairvoyant. There is an otherworldliness to her work that is hard to define precisely but speaks of the vast landscape of the imagination that can never be fully charted. Lucy endeavours to tap into the childlike sense of wonder and curiosity that many people lose as they age. She attempted to pass this on by providing intricately decorated masks for the viewers to wear as they looked round (see photo).

Undertaking the residency allowed Lucy to expand her practice with facilities that weren’t available to her anywhere else.  She has been avidly experimenting with glazes and different clays, learning the hard way that porcelain is more forgiving than terracotta and less likely to explode in the kiln.  On being asked what comes next now the residency is over she said it never stops and would carry on doing all the things she’s been doing. During the residency she found time for hArt, Hereford Contemporary Craft, and Hatch – an exhibition at Old Mayors Parlour alongside fellow artists Marissa Therese Harmon and Amy Gibbons, among others.  This year she’s already preparing for another round of hArt and an exhibition in Bristol aptly titled ‘Say Yes to Everything’. 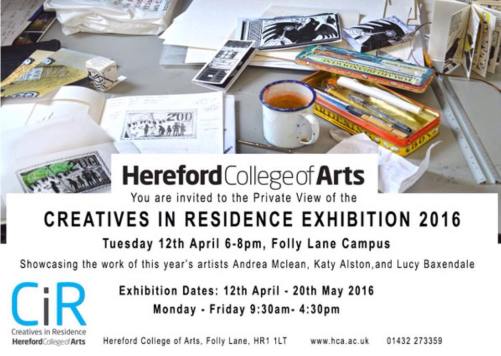