On February 4th The Underground Revolution will kick off 2017 with a night of folk and punk politics at The Booth Hall in Hereford.

Steve Ignorant’s Slice of Life band will be headlining and are supported by one of the latest bands to make waves the past few years on the Folk Punk music circuit, Headsticks from Stoke on Trent.

The opening act will be Hereford punks Terminal Rage who are playing Rebellion this year and whose Nigel Farage rants get the audience pumped for what’s to come. This will be a night of working-class heroes, live music and spoken word that will inspire the punk and revolutionary within us all.

Terminal Rage Drummer Bob Griffin received his first drum kit from big brother Dale Griffin who was in Mott the Hoople and the rest is history. The other members are no less intriguing, consisting of mountain boarding champion Raphael La Roche, also known for his permanent Mohawk (I would be lost without it on his head) and Wolverhampton transplant Rich Lovell whose first Clash experience changed him forever (much like The Clash did for Steve Ignorant). Rich sings and plays guitar for Terminal Rage and  is also one of the founders of The Underground Revolution Hereford.

Rich is anticipating this gig in a big way and says “Crass were my political inspiration, got me thinking, challenging my teenage views on life, on society and as such Steve Ignorant is a bit of a folk hero to me.”

If you were at our last gig of the year in December and enjoyed Sons of Clogger or attended our Under a Banner show in 2016, you will definitely connect with Headsticks music and may even find yourself dancing around with a pint in your hand. I really wanted to know what their songs were about so I asked. They are heavy on the mind and light on the feet. There is a lot of talent there – both musically and lyrically.

Frontman/Lyricist Andrew Tranter says about their songs “It’s a social commentary that the working classes can easily relate to…..we aim to make people stop and think with our songs and it does seem to do that! It’s not so much about smashing the statues and setting fire to the government buildings, but more of asking people to look outside their own bubble, basically to start giving a shit before it’s too late!” We need to listen folks so bring beer money, a keen mindset and your dancing boots.

We all know Steve Ignorant from his Crass and Conflict days but he recently has taken his talent in a new direction with his Slice of Life tour sharing his opinions with us through spoken word and acoustic songs.

Steve once chased (not literally) a girl to a Clash concert in Bristol and then found himself inspired enough to start his own punk band with friend Penny Rimbaud. He then became the youngest member of Crass and had fans listening to his every angry word. Steve isn’t very clued up on mobile phones or even Spotify according to an article in The Quietus and we like him like that…authentic and old school…who is running his Twitter account then?

All in all, it will be a beautiful night for Friends of the Underground Revolution Hereford carrying on from last year’s theme…A whole lot of good shit! 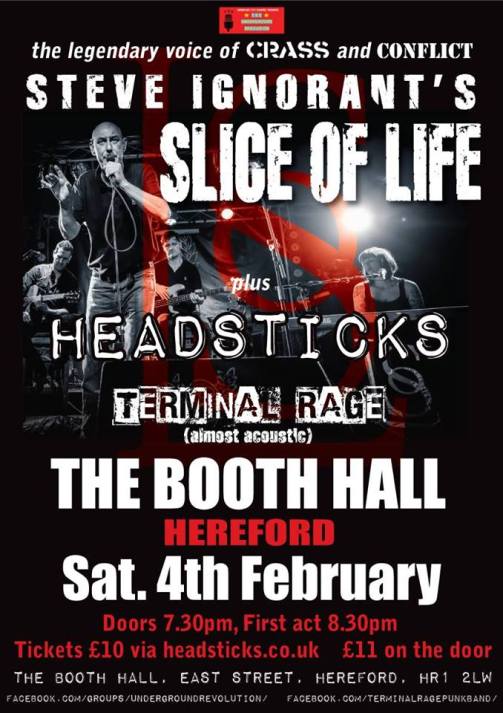