On November 25th The Underground Revolution hosted ‘A Wild Night of Garage Psych’ with special guests The Hungry Ghosts, Pablo Alto and DJ’s Sam and Siobhan at The Booth Hall in Hereford. It was a night of raw psych energy and enigmatic performances that included frontman Joe Joseph lying on the floor in the fetal position screaming into his mic. The crowd watched in amazement of course, and were carried away by their brand of ‘slaughterhouse blues’ and psychedelic fusion. They most certainly had us dancing to their sexy but at times violent sounds.

Pablo Alto have developed a following in the local music circuit. They are gregarious and put on a good n’ loud show – the crowds love it. Once ‘Spacecat’ came on we were all ears listening to a song that came to be after one of John Rose’s reoccurring nightmares about his cat Pablo going missing – except this time in space. I would’ve loved to be Pablo in that dream. They put some power into their performances which get me each and every time.

I was quite excited to have DJ’s Sam and Siobhan doing their thing between the bands. It was really a nice touch to break up two bands with a DJ set. The highlight of their set was when Sioban broke out with SexWitch on vinyl. You could almost say I was in shock – I had been listening to that album on repeat lately.

Anyway, I really enjoyed how they fused old and new psych sounds, it could have been a house party in the 60’s, and they kept the atmosphere authentic. They are one of those young couples you could find in a place like London or New York who know their music in depth and put on a stylin’ set. Hats off to them both.

Many Thanks to Element Audio for their support

Photography by Grace Biddlecombe  and article by Michelle Cuadra

We want to know what you think?

Musicians Against Homelessness gigs will take place nationally over a three-week period between the 18th of September and the 9th of October.

OASIS guru Alan McGee is teaming up with Hereford’s popular Post-Punk band the Linerunners and local music promoters’ The Underground Revolution to bring you a memorable all day Punk Festival. The music mogul started Musicians Against Homelessness earlier this year to raise funds for the homeless charity Crisis.

Hereford Music Promoters  The Underground Revolution devote their time to supporting bands and charities with a focus on social awareness, as well as local bands who otherwise would not have an outlet for their music.

They could not turn down the opportunity that was given to them by local band the Linerunners who were looking for a venue to stage this festival. The UR were already doing the festival to raise money for the Big Issue Foundation and felt that both charities would sit side by side beautifully, so they jumped on the idea.

What is ‘A Crisis of Conscience 40 Years of Punk Festival’?

‘A Crisis of Conscience’ is celebrating 40 years of punk attitude, music and most importantly the charitable spirit that is part of the punk ethos. It will also be raising funds to help support one of the nation’s biggest homeless charities, The Big Issue Foundation. It is an honour to work with both charities to bring forth awareness around an epidemic that can affect anyone at anytime.

The festival will include Musicians, Poets, Dj’s, Artists & Street Food, and will be split into a day and evening line-up. Tickets for the evening show are available on the door. Festival goers will be asked to give a donation of their choice during the day, to ensure the event is open and accessible to all.

The day line up is made up of 4 acts, 4 poets, Live art for Silent Auction, Fire Eaters and Killa Tacos will be on the premises selling their delicious brand of fresh and authentic tacos. Because nothing is nicer than tacos and beer!

Then in the evening their will be 5 bands for £5. All profits will be split equally and given to the charities’.

END_OF_DOCUMENT_TOKEN_TO_BE_REPLACED

GABBA GABBA HEY!  Purchase tickets HERE for the Wild Hare Club/Underground Revolution ‘Punky Reggae Party’ at the Booth Hall located in Hereford’s East Street independent quarter by MONDAY the 29th of September and win a Limited Edition Ramonas T-shirt designed by Beki Warren and screen printed by Nico Demus. Tickets must be purchased by midnight on 29/8/2016 to qualify for the giveaway.

The featured Image will be the design on the T-Shirt. Who wouldn’t want one?  We will also have a limited supply available for sale at the show.

Get ready for a night with the rockin’ ladies from the Ramonas and support acts The Irascibles who are a 3 piece bluesabilly combo from Cardiff mixing blues, rockabilly and township jive in a tendon-taught post-punk mash-up and Reggae Pie, the well-loved Hereford DJ collective will be spinning calypso, ska, rock steady, dancehall and roots until late to anybody who would move their boots! 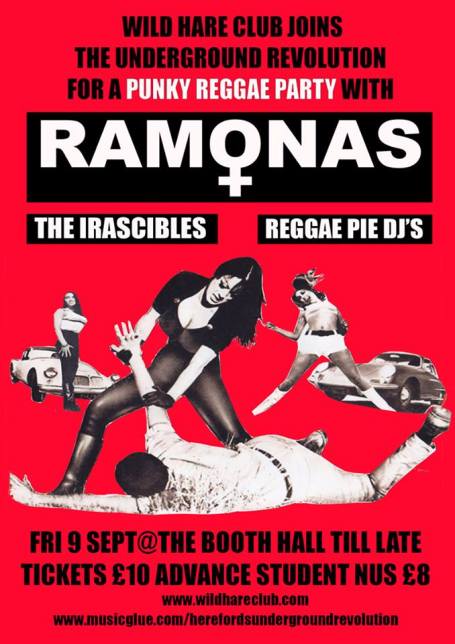 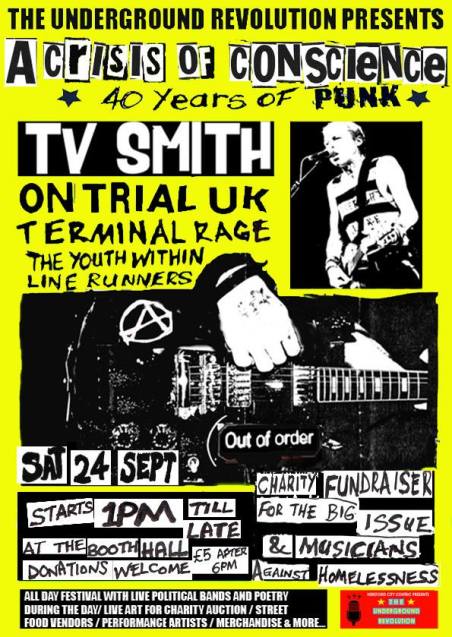 We want to know what you think 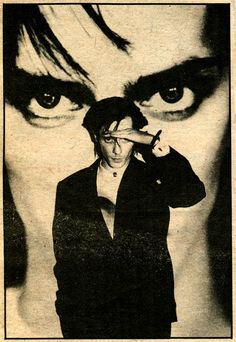 A couple of lost souls have approached me recently and asked, “What is the Dark Entries Friday the 13th night all about at The Booth Hall?”   I began my replies with “Well you don’t want to miss it”  But here is a more comprehensive explanation. It’s underground, alternative, dance, with a touch of industrial, goth post punk edgy, delirium infused tunes that push the boundaries of your inner freak, poetic, music loving, uncontrollably exuberant, morbid but totally pleasant and sexy self.  Do you get it now?  I really hope so because this kind of night doesn’t happen everyday and may not happen again….so be there!

END_OF_DOCUMENT_TOKEN_TO_BE_REPLACED

Hereford City Centric put on quite a night last night by means of their their music promotion entity The Underground Revolution. The Booth Hall is steadily becoming a key venue for seeing live alternative music. There was some concern around rumours that Dave Savager, the drummer from arty Ledbury post-punk/psyche band Pablo Alto was in the grip of a fortnight long fever and wouldn’t be playing, but the three of them took to the stage and performed a set of melodious and atmospheric music led by John Rose’s spacey effects-laden guitar, and supported by Tessa Frith’s reliable bass backing. END_OF_DOCUMENT_TOKEN_TO_BE_REPLACED

There is the expression ‘of a sound mind’, which was a relevant theme when you entered the bottom floor of the The Royal British Legion in Ledbury last Saturday, where a local punk gig in aid of the charity Mind was being held.

The brainchild of local photographer and music producer Edoardo Mustafic aka Ed Headphones, a well loved eccentric around town, the gig featured 3 local punk bands (The Youth Within, Billy Whizz, Pablo Alto) that would end up shaking the walls of The Royal British Legion for a night few locals will forget, complementing his motto for the night ‘You’d be mad not to come’. Quite!

There were technical issues during the Billy Whizz performance, (down to dodgy lighting apparently), but soon in true Herefordshire style, onlookers jumped into lend a helping hand, and all was shortly sorted commencing the night’s shenanigans. Revellers were drawn to the sounds through the cobbled streets, as it was such a success that they had to turn punters away! All in a night’s gig. END_OF_DOCUMENT_TOKEN_TO_BE_REPLACED